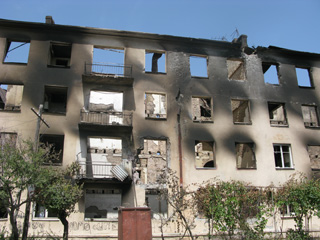 Residents of the war zone emerge from their hiding places and start to rebuild.

[Nearly two weeks after fighting broke out between Georgia and Russia over South Ossetia, journalist Liza Valieva traveled from her home in the Russian republic of North Ossetia into South Ossetia. She, her husband, and a friend were taking food and other supplies to relatives in the disputed region. They met people thankful to be alive and thankful to Russia for its intervention. Locals’ hatred for the government in Tbilisi was mingled with a desire for revenge but an acknowledgement that some Georgians in South Ossetia are also suffering. With Russian forces seeming to have settled in in areas of Georgia outside South Ossetia and Abkhazia, and with the Kremlin’s recognition of the two breakaway regions’ independence, the current state of affairs has already taken on a sense of permanence here. – TOL]

A week after the last thunders of war died out, every kilometer of the road south from Vladikavkaz, in Russia, to Tskhinvali, the capital of South Ossetia, showed signs of the recent conflict. Our bus passed military camps, tanks, and armored vehicles parked by the roadside.
Some 200 meters north of the Roki tunnel, which cuts through the mountains and connects Russia to South Ossetia, a stream of tanks rumbled past, kicking up plumes of dust. Soldiers pulled us over and asked us to wait for the air to clear. We sat for half an hour while a line of cars formed behind us.

Past the village of Java came a string of ethnic Georgian villages. For several years, Ossetians used a road bypassing these villages and it took them an hour longer to get to Tskhinvali, which lies in the south, near the border with Georgia proper.

We passed burnt-out houses with embers still smoldering. There were no signs of life among the apple orchards and corn fields.

From the war-torn Georgian village I entered Tskhinvali, a city destroyed by shells and fire. Trees, crushed by bombs, lay by the roadside. The downtown area was a collection of shell-pocked, burnt-out buildings. Those whose houses were left roofless with shattered windows are the lucky ones. But they are few.

‘A DANCE OF DEATH’

Tskhinvali residents use new words of greeting nowadays. During my several days in the town, I often heard the following conversation:

“Hello, is everyone alive in your family?”

“Yes, everyone is alive. What about your family?”

“Thank God. Everyone is alive, too. Is your home OK?”

“Windows smashed and the roof damaged by a shell.”

“It's not a big deal. It's good that everyone has survived.”

I saw few young women in the city and no children, but many soldiers. Within days Tskhinvali had turned into a military camp with tanks and armored vehicles trundling up and down trailing dust and the smell of gasoline.

Close to the train station sat two burnt-out Georgian tanks. Dzhulietta Tuayeva, a resident of Tskhinvali who was in the town during a Georgian bombing raid, said one Georgian tank entered her yard. «The tank was spinning around firing directly at houses. It was a death dance.»

A 30-year-old soldier in South Ossetia's special forces said 25 to 30 Georgian tanks were destroyed and eight captured during the fighting. «We were armed with rifles and anti-tank grenade launchers. You need to shoot from a distance of 20 to 30 meters to be able to get away. You shoot and run into a shelter. You need to fire several times at the same spot to destroy a tank,» he said.

Many Georgian troops were reportedly killed in Tskhinvali and its suburbs. «We surrounded and killed off Georgians in Oak Tree Grove [an area near Tskhinvali],» the soldier recalled.

Although the streets had been cleared of corpses, the stench of dead bodies hung in the air, especially in some streets.

«Saakashvili and the criminal regime in Tbilisi don’t care about soldiers. Their bodies were all around Tskhinvali and the nearby woods. We just collected them, put into caskets as required by Christian tradition and were ready to hand them over to the Georgian side. But no requests have been filed. The West ignores the issue for some reason,» Eduard Kokoity, president of South Ossetia, said.

Local residents take the West's condemnation of Russia’s movement into South Ossetia as an insult. But Kokoity said he noticed a shift away from what he called a pro-Georgian bias in Western media coverage. "Many foreign journalists have been here. They saw everything for real and reported from the spot.”

Located close to a school is a cemetery where casualties of the first conflict between Georgia and South Ossetia in the early 1990s had been buried. It also took fire. Several tombstones have shell holes, some were knocked down. The fence was crushed by a tank.

A woman passing by came over to me. She pointed her finger in the direction of the Georgian border and said, «These cowards are afraid of our dead soldiers.»

«How could they do this?» she said pointing to the damaged cemetery. «They call themselves faithful.»

I met about 10 men of different age on one Tskhinvali street. They sat on the pavement, relaxing, with brooms lying about. All kept silent, some were smoking.

A South Ossetia police officer told me that these were Georgian prisoners who will be exchanged for imprisoned Ossetians. «We gave them food, allowed them to wash, and took them out to clean the streets. Let them clean up the mess their countrymen made here.»

Some stores were damaged by bombs, while others looted. Irina Lavoyeva, owner of a local store, gave all her goods away to neighbors during a three-day blockade. «People have no place to buy anything. We should help each other through hard times.»

Lavoyeva is Georgian, while her husband is Ossetian. They have three children. She recalled that when the first humanitarian convoy arrived, she refused to accept aid. «I am a Georgian,» she said she told neighbors. «What moral grounds do I have to take the aid?» But neighbors said, «During Georgian bombing raids you hid in the cellar with us, risked your life. You have the right to receive humanitarian aid.»

After a long search I found a grocery store, one of the first to open in the city after the fighting. But its shelves were empty. Among the few items on offer were balloons, sauces, and cocoa. The shopkeepers were having an animated discussion. One of them recalled the days she spent in a cellar.

«It was quiet for a moment. Then I heard the sound of a plane approaching. I came out shouting ‘Hurray! Russia has come to our rescue!’ But the plane started to drop bombs on the city. It was a Georgian aircraft. I hid in the cellar again. I was scared,» she said.

One vendor asked me, «Did you see the Georgian prisoners cleaning the streets? If I lost a loved one, I would have murdered one of them.»

«They deserve pity, too,» I said and immediately regretted it, imagining their anger. But to my surprise, they agreed with me.

«Yes, I understand. I also pity them,» one of them responded.

THE SOUNDS OF PEACE

Three days later Tskhinvali was suddenly a crowded place. The city was bustling with activity. It no longer seemed as empty and deserted as at the start of my stay. Cars and buses packed with people, including children, were streaming back to the town. Some came back to repair the damage, others to attend a rally urging Russia to recognize South Ossetia as an independent state.

Thousands gathered at Teatralnaya Square for the two-hour rally, held under a merciless sun. People covered their heads with newspapers. No one left. It seemed that everyone came here in a spirit of hope.

«We’re tired of suffering. We don’t bother anyone, let them leave us alone. We need a peaceful life. That means we need independence,» said Soslan Dzhioyev, 62.

Anatoly Barankevich said, «Tears often well up in my eyes when I walk the streets and see faces that say 'We have won! I congratulate you on victory.’ It didn’t come easy to us. I did all I could to reassure people that Russia will come to our rescue, Russia will not betray us, Russia is with us.»

Speaking at the rally, Bishop Georgy Pukhaev, a local cleric, told the crowd that when God wants to punish people he makes them insane first. «He did so to our neighbors. Today, on 21 August, 13 days after, we have the right to tell the world that we no longer want to live with the nation that stabbed and murdered our people on grounds of race.»

On the same night, conductor Valery Gergiev gave a concert on the steps of the bombed parliament building. The music of St. Petersburg’s Mariinsky Theater Orchestra gave the scene a surreal touch against the backdrop of ruins surrounded by armored vehicles and soldiers.

Many in the audience confessed that they never listen to classical music, but that night they did, taking in every note. These were not the sounds of the bombs and bullets they had been hearing for days. These were the sounds of a peaceful life.

The orchestra played the tragic final movement of Tchaikovsky's Sixth Symphony and Shostakovich's Seventh Symphony, widely interpreted as an homage to Leningrad, which withstood a brutal Nazi siege during World War II.

«You have survived a monstrous bombing – direct fire aimed to kill people in a sleeping city. I want us to reiterate today that if it were not for the help from Great Russia, the attacks would have taken a heavier toll on the Ossetian people,» Gergiev said.

«After the Beslan tragedy, the death of 2,000 more people is a terrible loss. Those who hoped to get away unpunished miscalculated. More and more people in the world are learning the truth about what happened here. I think that today we can tell the world that Tskhinvali is a heroic city. What I saw today resembled Stalingrad. The city has been completely ruined.»

I noticed an elderly woman who came to the concert with a chair. «Gergiev with his orchestra is the first ray of life for us after Georgia wreaked havoc here,» she said.

As I left Tskhinvali the following day, the city seem less gloomy and deserted. Emergency workers repaired damaged buildings, while residents removed the rubble and fixed windows and roofs.

On my way back, I saw homes being bulldozed in Georgian villages. One of the women on the bus said, «They codenamed their Tskhinvali sweep operation 'Clear Field.' We don’t need anything from them, not a single home. Yes, they deserve pity. Don't we deserve it, too?»

Liza Valieva is editor in chief of Ossetia.ru and a member of the Institute for War and Peace Reporting’s Cross Caucasus Journalism Network. 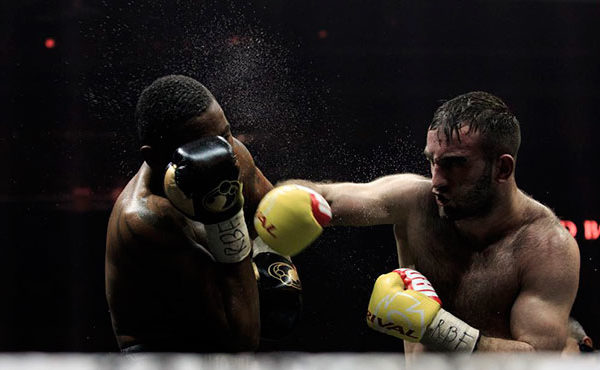 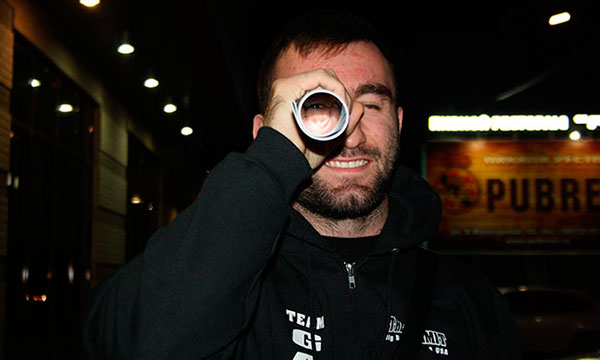